Mozambique has a seafaring heritage. Scientists have found evidence of people traveling by water from the Middle East to southeastern Africa more than a thousand years ago.

Today, tourists know its beaches to be among the most beautiful in the world. But the government has yet to harness this history – and potential – despite a serious effort several years ago to start a domestic shipbuilding industry.

Mozambique made a major move to create a world-class, ship-repair facility several years ago, but it stumbled into a debt-financing scandal instead. In the meantime, the need for ships and ship repairs has grown. Major energy companies are preparing to develop an estimated $30 billion gas field off its coast, an enterprise that requires protection along the coastline.

With more than 1,400 miles of coastline, international vessels navigating the strait between Mozambique and Madagascar frequently need a safe harbor when something goes wrong. But repair yards are few and far between. Currently, commercial vessels operating along the southeast coast of Africa must either take their chances for a slot at Kenya’s busy port of Mombasa or sail all the way to the South African port of Durban for repairs. 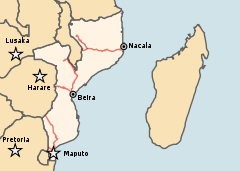 To fix this problem – and to bring business to Mozambique – the government created an entity called Mozambique Asset Management (MAM) in 2013. MAM contracted with the international shipbuilding company Privinvest to buy the wherewithal to develop ship repair facilities in Maputo and Pemba. In 2017, Privinvest reported that the government was satisfied with its progress on deliveries. Unfortunately, MAM has fallen behind on repaying the $535 million loan Mozambique’s government guaranteed on its behalf.

MAM has been moving forward with at least some of its activities in the port of Pemba, including establishing the Pemba Naval School, expanding the land for operations at the Pemba Naval Base and preparing at least some instructors for the task at hand. But much more needs to be done. Unfortunately, the legal wrangling around the unpaid debt has slowed the pace of progress.

Indeed, the political fallout from the debt matter – which includes a U.S. indictment filed late last year against a handful of individuals – has overshadowed the project itself. Necessary though a proper ship-repair facility along this stretch of coast might be, the capital needed to move forward has not been found. Indeed, the toughest critic of the loans Mozambique took out in part to finance the MAM’s ship-repair operations has been the International Monetary Fund, an important donor to the impoverished nation.

The situation is not novel in Mozambique. Experts have complained for years that the government has too often undertaken expensive projects, such as road building and other landlocked infrastructure efforts, without the appropriate follow through including the involvement and commitment of locals. That has frequently meant a focus on projects other than port development and too little emphasis on training. This is true despite the two millennia that Mozambicans and their antecedents have been heavily reliant on the seas for commerce and transportation.

No matter what the donor or lender priorities of the moment might be, the need for domestic ship-repair capacity will not go away. Mozambique suffers from a substantial trade deficit. It shouldn’t have to outsource the repair of vessels passing through its waters. National interests and market forces will eventually come together under the umbrella of common sense, and projects with ambitious yet sensible goals like MAM’s will be revived before long.

Since its 15-year civil war ended in 1992, Mozambique has struggled to emerge from its colonial habits. Relying on other nations to make and repair its ships-at-sea should be one habit it discards soon.

Eugen Iladi is a freelance reporter based in Virginia who covers politics, conflict, business and development in emerging markets.

Kenya Budget Review 2019/20: Finding Growth Verses Taxation Balance Why the African Monetary Fund is a good idea and what can be done to get it going
back to top

New leader is changing Angola. But the e…

U.S outraged by killing of protesters in…

China cuts tariffs on $75b US goods

Not more than 3 SIM card for a Nigerian