Massive funding has been donated to help fight the coronavirus in Africa. This nonprofit is trying to keep track of it

How much money has been generated to fight the spread of coronavirus in Africa? It's hard to keep track.

The continent has more than 63,000 cases of the virus, according to the World Health Organization. In response, private individuals, governments, and other organizations have donated extensive funds to provide protective gear, test for the virus, and provide relief materials for people in vulnerable countries on the continent. 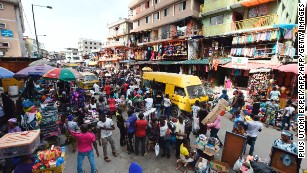 In Nigeria, the government approved a 10 billion naira grant (about $27 million) to fight the spread of coronavirus. And in Ghana, $100 million was released by the government to expand the infrastructure needed to curtail the virus in the West African country.

Nigeria-based nonprofit Follow the Money is compiling a list of all the pledges and funds donated to minimize the spread of the virus in Africa. It is also tracking how the money is spent by contacting donors and government agencies for detailed information on spending plans.

With a presence in Nigeria, Kenya, the Gambia, Zimbabwe, Cameroon, Malawi, and Liberia the group has a focus on tracking government spending and international aid in rural communities, according to co-founder, Hamzat Lawal.

"Follow the Money tries to answer where funds that have been donated to rural communities in Africa are coming from, where they are going and most importantly, how they are being utilized, particularly at the grassroots level," he told CNN.

According to Lawal, the group monitors announcements of grants and donations for low-income communities, and for transparency, they contact the government, agency, or individual responsible for the grant to provide a breakdown of how they intend to spend the money.

"We also visit these communities to find out if they have received any funding or palliatives based on the information we get from the donors. We make sure we empower them with information we have on the donation so that they are able to demand accountability from the government or agency involved in the donation," he explained.

In Nigeria, Follow the Money created a database with information on more than 250 grants and other funds released to fight the spread of coronavirus.

According to Lawal, the team has traced coronavirus interventions worth up to 87 billion naira (about $222 million) in the country.

The database has information on how much was donated, who donated it, date it was announced and whether or not it has been disbursed for use. Lawal said the information was sourced from publicly available sources, including news reports.

"We created a hashtag called #followcovid19money. Through the hashtag, we are engaging private individuals and companies on social media to give us a breakdown of how they intend to use the money to fight coronavirus," he said.

On social media, agencies including the Nigerian National Petroleum Corporation and the Federal Capital Territory, which administers Nigeria's capital, Abuja, have so far responded to Follow the Money's questions on how its donations will be spent.

"We know for example through responses that the NNPC is going to different parts of the country donating facemasks, ambulances and protective gear for health workers," he explained.

But as a result of curfews and lockdowns in certain parts of the country, Lawal said it's hard to trace whether the grants are being used the way they are supposed to be used.

The team usually goes into communities to find out if funding is being allocated the way it's supposed to be. However, in the wake of the virus, it has had to minimize contact with people, he said.

Nigeria to end DStv, others’ monopoly

South African banks need to do more to e…

Over 52% of e-commerce websites globally…

Chakwera has his work cut out restoring …

Get an Inside Look at the Galaxy Z

Why South Africa has a keen interest in …

Angola to kick off niobium exploitation …

Electronic banking fraud in Nigeria: how…

Burundi gets new prime minister after 22…